Olfactory and taste disorders in the ENT practice

The sense of smell is crucial in our daily lives. Therefore, it is not surprising that a reduced sense of smell negatively affects the quality of life. A possible therapy depends on the cause of the disturbed sense of smell. This can be, for example, medication or smell training. Often one is only aware of the value of the sense of smell (and taste) when an odor or taste disorder occurs. Common causes of odor loss include aging, upper respiratory viral infections, nasal and paranasal sinus problems, and head trauma. Less common causes are drugs (amphetamines) and toxic substances (chlorine, heavy metals). In addition, odor loss can be an early symptom of Parkinson’s or Alzheimer’s disease. Odor loss is a serious medical problem and deserves a good analysis of gravity and nature. For permanent odor and taste disorders, further examination by an ENT specialist is likely to be required.

Examination and diagnosis of olfactory disorders

The beginning of examinations in the ENT practice is a detailed questioning of the patient, the medical history. The doctor asks for anything that can give him an indication of the nature of the olfactory disorders: Can the patient smell nothing more or only less than before? Does he/ she no longer perceive certain fragrances? Does he/ she have taste and other complaints? Is he/she taking medication and if so, which one? From the answers to these and many other questions, there are already first indications for the exact diagnosis.

In addition to the patient survey, a thorough ENT examination is required. A proper inspection of the inner nose is done by means of a nose endoscope. The doctor is looking for an abnormal nose, nasal polyp or signs of chronic sinusitis. In particular, it is checked whether the access to the olfactory epithelium at the tip of the nose is free. Good oral cavity inspection is also required. Infections in the oral cavity can lead to unpleasant odors.

Various methods are available for checking the sense of smell. For example, the Sniffin’ Sticks Screening 12 test, in which tests the patient must recognize and name 12 everyday odors. These tests are subjective and require that the patient be physically and mentally able to participate actively. Sometimes this is difficult for small children or with dementia patients. Then, measuring methods are used that can be performed without the assistance of the patient. Such objective methods include, for example, the measurement of electrical smelling potentials. 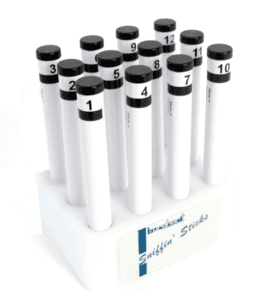 With the Burghart Sniffin Sticks, felt-filled pens are held under both nostrils for about 3 seconds each. A total of 12 (Screening 12 test) or 16 (Identification test 16) different perfume sticks (Sniffin ‘Sticks) are presented to the patient. The patient must name the presented scent by name. For this the patient gets a multiple choice card with 4 answers. On the basis of the results, the odor disturbance can then be assessed to its extent. In addition, after the identification you can also perform a smell threshold test or a discrimination test. The advantage of the Sniffin Sticks is that they are easy to use and you can do several tests. The Sniffin Sticks can be used for multiple patients and are CE marked. In addition to the Sniffin’ Sticks there are also optional taste strips for the examination of the taste. 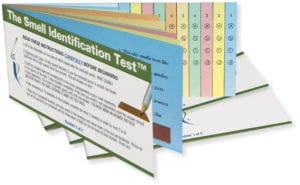 Measurement of the olfactory potential

An objective proof of olfactory disturbances is possible without direct cooperation of the patient. Objective tests include olfactory evoked potentials, functional magnetic resonance imaging, and functional positron emission tomography. Olfactory evoked potentials are performed by measuring the electrical potentials (OEPs) or by deriving olfactory brain waves triggered by a scent on the sensory cells of the olfactory mucosa. For this purpose, tiny electrodes are attached to the olfactory mucosa of the patient. The disadvantage of this objective test of the sense of smell is that it is very expensive. Therefore, it is only offered and performed in specialist clinics and practices.

Sinonasal diseases are responsible for 52% to 72% of olfactory disorders, depending on the population studied. Odor loss is associated with the increasing frequency of upper respiratory infections. The severity of sinonasal disease also correlates with the degree of olfactory loss that increases in the course of allergic rhinitis, chronic rhinosinusitis and nasal polyps. In patients with chronic rhinosinusitis with nasal polyps, a decreased olfactory bulb size occurs, which is associated with an odor loss. The odor improves and the onion size increases in the three months after endoscopic sinus surgery in patients with nasal polyposis. The treatment of sinus disease or polyposis with nasal steroids for eight weeks has been associated with improved odor (subjective and objective on the odor levels) and an improvement in the signs of sinonasal disease. In the long term, oral steroids have not been shown to favor olfactory loss in sinonasal disease, but may temporarily relieve the sense of smell in patients with nasal polyposis or chronic rhinosinusitis. Oral steroids may be helpful in diagnosing or temporarily alleviating symptoms.

Head trauma is a well known cause of odor loss. Trauma can lead to a loss of odor detection, such. For example, damage to the olfactory nerve by cribriform plate fractures or a closed head injury (due to nerve disorders or shear forces) or difficulty in distinguishing the odor caused by a closed head injury and cortical trauma. Although some patients have cerebral damage from magnetic resonance imaging or CT in the olfactory bulb, cribriform plate, or olfactory cortex, other patients may experience damage only as abnormal perfusion in single photon emission. Twelve weeks (preferably longer!) of smell training has been shown to increase olfactory sensitivity in one-third of patients who had olfactory loss due to post-traumatic, post-infective or idiopathic causes. This home-based technique exposes four different odors (rose, eucalytus, lime and clove) twice a day. This can be done with our smell training kits such as the Smell Quartet (4 x sticks) or the essential oils (4 x oils). Read more about odor training on this page.

Patients with mild cognitive impairment and Alzheimer’s disease may subjectively recognize odor and taste deficiencies as early symptoms. Under these conditions, gustatory and olfactory tests indicate greater dysfunction than patients report subjectively. Odor and taste loss in patients with mild cognitive impairment and Alzheimer’s disease differs from those of age-matched controls but not between the two conditions. Gustatory loss is reported in all areas studied: sweet, sour, salty, umami and bitter. It is believed that the taste and odor loss is cortical mediated in mild cognitive impairment and Alzheimer’s disease. The severity of the disease in Parkinson’s and Alzheimer’s diseases correlates with the severity of the odor and the loss of taste. Most patients with early Parkinson’s disease experience a loss of odor and taste. It has been suggested that these symptoms help with early detection. Patients with Parkinson’s Disease experience odor and taste loss at the onset of the disease process (one of the five most common symptoms) as extremely disturbing.
Twelve weeks (preferaby longer!) of smell training improved function, especially odor discrimination, in one-fifth of patients with Parkinson’s disease. This happened regardless of the duration of the disease. This smelling workout exposes four different smells twice a day. This can be done with our scent training kits such as the Smell Quartet (4 x sticks) or the essential oils (4 x oils). Read more about smell training on this page.

In addition, a smelling training was evaluated in several works as a supplementary or subsequent therapy option and its effectiveness was confirmed. As training fragrances are z. Rose, eucalyptus, lemon and clove. These four scents represent the fragrance categories flowery, fruity, spicy and resinous. To notice the effect of the odor training, you need to do the training for several months. Various studies have shown that the first result is often noticeable after 6-7 months. It is also important that you do it daily. In the mornings and the evenings.

Is smell training suitable for me?

How does the smell training work?

The smell training stimulates the smell part in the brain. Clinical studies have shown that people who have done the odor training have an improved sense of smell compared to people who did not do any odor training. The participants of the study had to perform an odor and smell test. This resulted in the stronger test with the people who had trained their sense of smell. In this study, some of the participants performed the odor training with strong odors and, in addition, some of the participants did the training with less strong odors. This showed that the group with the strong odors had better results with the smell tests. This shows that the concentration (strength) of the odors is very important. With the standardized scented pencils from Burghart the user is dependent on a correct fragrance concentration. In addition, the fragrance pens come with a best before date, so you can be sure that the pens are still reliable and usable.