What is smell training?

Train your sense of smell

Improve your sense of smell through odor training? It may sound strange, but it certainly makes sense. Training muscles by going to the gym or practicing a musical instrument every day ensures that you (hopefully) progress in what you practice. So you must also see the training of the sense of smell. It is, as it were, physiotherapy for the nose. That training your sense of smell is actually useful is evident from various studies and studies. However, it does not make sense in every condition of the sense of smell. On this page we will provide more background information about odor training.

In 2009, Professor Thomas Hummel of the University of Dresden started an investigation to see whether daily, intensive smelling of different odors has a positive effect on the sense of smell. The study lasted 12 weeks and was carried out under a group of people with anosmia. These people had all lost their sense of smell due to head injuries, severe infection of the upper respiratory tract, or other unaccountable reasons. One group had to smell daily four different scents (rose, eucalyptus, lemon and cloves) in the morning and evening over a period of 12 weeks. The other group did not participate in the odor training. Both groups were tested for odor at the beginning and end of the study using the Sniffin ‘Sticks fragrance pens. This showed that a large percentage of the group of people who had followed the odor training had a better score on the odor tests at the end of the study compared to the group that had not followed odor training.

In addition to Dr. Hummel there are also several other studies on the effect of odor training showing that the 2 times daily smell smell has a positive effect on the development of the odor ability. The effect is particularly noticeable in daily training of the sense of smell for 6-7 months. The effect of the odor training, however, is highly dependent on each condition. It is certainly not a medicine but a way to speed up and stimulate the recovery.

Odor training with the Hummel method

The most commonly used odor training is based on the research of Professor Thomas Hummel from the University of Dresden. This training consists of 2 times a day intensive smelling of 4 different scents: rose, eucalyptus, lemon (lime) and clove. This is the original fragrance training as prescribed by (ENT) doctors worldwide. This training can be performed with the help of 4 fragrance pens or with 4 oils.

These pens are in collaboration with Dr. Hummel developed by the company Burghart and available through our webshop. The advantage of these pens is that they last for a long time (about 1-1.5 years) and are easy to use. They are, as it were, four felt-tip pens that are not provided with ink but with natural fragrances. Each pen has a best-before date so you can be sure that the pens have the correct fragrance strength and are reliable for the training. As an alternative to the fragrance pens, you can also use essential oils, for example. 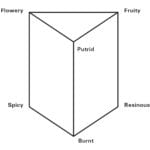 The scents that have been chosen by Dr. Hummel are rose, eucalyptus, lemon (lime) and clove. As the flavors have been classified into sweet, bitter, sour and salt, attempts have also been made to classify odors. In 1916 Hans Henning tried to divide the scents into 6 categories. From this came the following types of scent (fragrance prism): flowers (like lavender or rose petals), ethereal (such as ether or cleansing liquid), resinous (such as resin or turpentine), spicy (like cinnamon or nutmeg), spoiled (such as faeces or rotten eggs) and burned (such as tar oil), the first four being closely related and depicted as the vertices of a plane of a prism (see image). This is also called the odor prism.

The by Dr. Hummel selected scents for the 4 sticks are based on these scents: